He Knows About the Potatoes

I stayed up late making a batch of apple muffins and got up early to throw in a batch of chocolate ones before the guests arrived. This is PNG, so no telling when exactly to expect the group of anywhere from five to thirty ladies; but I figured before 10 a.m. was unlikely. It was a safe bet. The muffins had plenty of time to cool with no sign of company in sight. I was glad I hadn’t stayed up late to finish the second batch. My husband, on the other hand, had stayed up quite late getting the bathroom cleaned.

10 a.m., 10:30 a.m. 11 a.m. 11:30 a.m.—no one, no phone call. Those muffins started to look pretty tempting, and I started to wonder if somehow plans had changed between Sunday and Wednesday. “If no one is here by noon,” I thought, “I’m having muffins for lunch.” It took a few phone calls to confirm that, yes, during the morning plans had apparently changed; and the ladies weren’t going to make it. No problem, this is PNG. You learn to go with the flow.

The muffins got divided up. Some went to the neighbors, some to the pastor’s family and another plate we dropped off to friends who just had a baby boy. As we drove home from that visit, I found out that more company was coming over this time for dinner. No worries, Simon’s aunt had recently given us a chicken, which I hadn’t gotten around to cooking yet. I had a few carrots and potatoes to do a roast so with rice, I thought, that should feed everyone.

“I could really use a few more potatoes,” I told my husband. “But let’s just use what we have.” Two people coming over turned into four people coming over. I needed to get the roast going, but Simon told me to go lay down for 20 minutes first, which was a smart decision.

When I got up from my nap, Simon was peeling potatoes—more potatoes then we had in the house. The neighbor had returned the muffin plate bringing it back heaped up with potatoes. It was perfect. We got the roast in late—really late, but the guests didn’t arrive until well past eight, so it all worked out. And I just had to smile because as crazy and unpredictable as every day life can be here in PNG, God knows. He knows whose coming over and who plans to but doesn’t make it. He knows who needs a visit or even something as simple as a plate of muffins. He knows the right timing for everything especially when I don’t. He knows I need those extra potatoes and as small a thing as it is he takes care of it every single time. 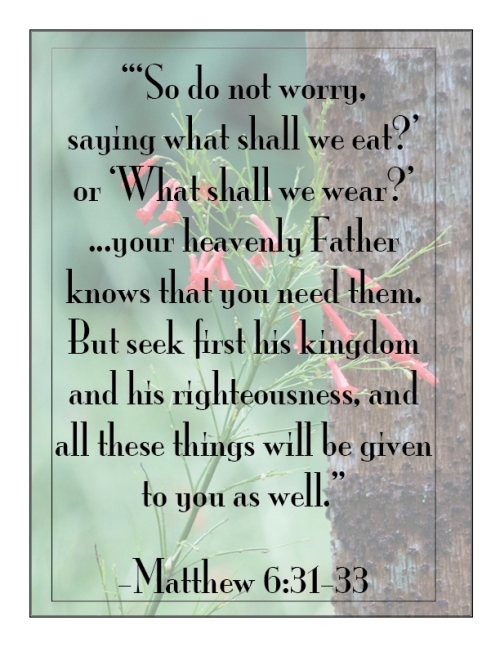