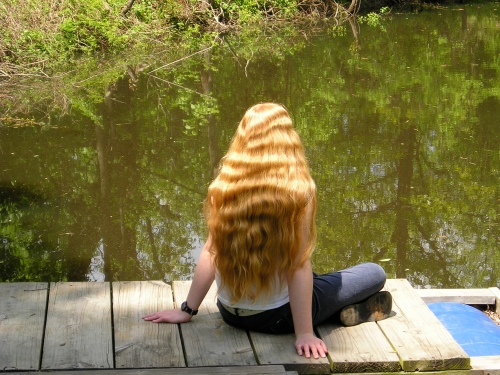 I took an eleven year old to see Brave. No boys were offering, so I thought why not just go myself and make a pre-teen’s day while I was at it. I have to admit the heroine’s hair was my sole reason for wanting to see the movie. Well, that and Pixar which rarely disappoints.

A couple week’s ago, while visiting my best friend in St. Louis, we broke out the first Anne of Green Gables movie. We hadn’t watched it together in years, and for that precious moment I felt like someone understood a piece of who I was. There we were, two redheads sitting on the couch eating ice cream and quoting just about every other line of the film. “You should watch this” my friend told her husband. “You’ll understand me more.” It feels good to be understood even if that understanding only touches on the culture of a hair color.

I can’t seem to read a book twice. Even a book I dearly love, but Sunday I listened to an audio version of the first four chapters of Anne of Green Gables. I couldn’t help but smile at the small town busybody, the proper yet cold Marilla, and sweet tender Matthew. Then of course there is Anne. How could anyone not be drawn to the wistful and imaginative Anne Shirley?

Having red hair equals attention sometimes good, sometimes not so good. It does end up defining you in a way, and no I’m not Irish even though everybody asks. I got my red hair from my grandpa whose parents were both Dutch.

I had long long red hair until I cut it on a whim in college. About a week after I cut it, a guy I never remember seeing before came up to me in the cafeteria and said he was sorry to see I’d cut my hair. But, I was—and still am—happy with my shorter more curly cut.

I don’t ever plan on dying my strawberry blond hair. I like my more fiery side, and I loved the fiery side of Brave’s redheaded princess. I don’t want to ruin the movie for anyone, so I’ll just say it was nice to see all of that curly red hair bouncing around on the big screen although at the end of the day nothing can beat the complex character of Anne of Avonlea.