The Story I Couldn’t Write (part I) 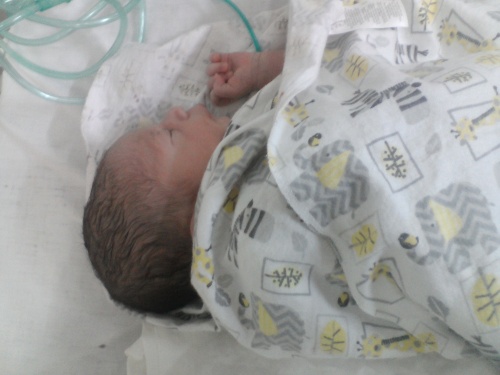 I lived each moment over and over in my head to the point where I told myself I would write it out so that I could have peace again. That thought gave me peace—the peace I needed to survive, but then I never brought myself to put pen to paper or (in this case) fingers to the keyboard.

It is still vivid—although parts have started blurring into the background as life moves on. It is still raw in places especially when I think about the fragility of life, the feeling of utter helplessness and the undeniable grace of God that gets you through.

My son was hours old when they took him. After over 20 hours of labor, the strongest feeling that overcame me wasn’t wonder or that instant bond of love mingled with joy (that all the birth stories talk about) it was relief—a pure flood of sweet relief. I survived. He was here. All was right with the world. My husband held him and Trevor peeked open one of his little eyes as if trying to decided if this new world he had joined was worth waking up for. He barely cried, gave a little cough and closed his eyes again.

When everything seemed stable, my husband left to go pick up my dad who had been anxiously waiting for news and the chance to see his first grandchild. My mom and the midwife took Trevor over to give him his first bath while I rested. Mom was a bit anxious that Trevor had barely cried when he was born. I told her not to worry saying the midwives knew what they were doing.

I laid back in bed and waited for them to bring my little guy back. No one came. I wanted to get up and take a shower before visitors arrived, but a feeling of light-headedness kept me from trying to stand while no one else was in the room.

It seemed like an eternity, but finally my mom came back. During delivery, Trevor had sucked junk into his lungs. His skin was turning blue. The doctor came around and put him on oxygen. The nurses had left my mom (an RN) to try and suction his lungs. After some time on oxygen his coloring started to look more normal.

Mom handed my little buddle of joy back to me, but as I got ready to feed him for the first time his skin started turning blue again. Back he went on oxygen and this time the midwives recommended transferring him over to the hospital across the street which was better equipped to care for sick babies. I had wanted to avoid that public hospital after learning that my brother and sister-in-law had lost their first child there.

It was late Friday afternoon. My regular doctor went home and the newly hired weekend doctor took over. He started giving Trevor antibiotics through an IV and told us he would need them for the next five days. Simon and my dad came back. They got an ambulance ready to take us across the street to the general hospital. My mom held Trevor while the midwife and I held on to the oxygen tank, which was apparently a faulty tank and if not held at just the right angle would stop working.

So there he was hours old, lying in a clear plastic basinet in a room full of other sick babies. An oxygen tube was taped to his little cheek and snaked into his nose. A yellow IV port was gingerly taped down around his tiny left hand. They told me he was too sick to nurse. They told me my mom was not allowed to stay with him. They told my husband only the mother is allowed to enter the intensive care unit.

We left. It was awful. I couldn’t think about it and blinked back tears as we walked to the car. Of course, a story I had read in the newspaper awhile back popped into my head. The story told of a biracial couple in South America who gave birth to a light skinned baby.  Shockingly, the baby was switched by hospital staff with a different baby and the couple was never able to recover their son. It was all I could do to push those thoughts and more from my mind.

5 responses to “The Story I Couldn’t Write (part I)”